by Nadín Reyes Maldonado, a Mexican human rights defender who founded the Committee of Family Members of the Disappeared and Detained ‘Until We Find Them’ (see bio and more information below). The number of forced disappearances in Mexico has gone up dramatically since 2007 when the drug war started through the Mérida Initiative.  As Mexico has become more militarized as a result of U.S. funding, there has been increase in human rights violations. Nadín will be linking these issues of militarization, drug policy, and free trade agreements in which the US plays a major role to the 27,000 forced disappearances that have taken place over the last decade. 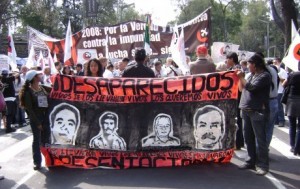 Nadín Reyes Maldonado became a human rights defender in May 2007 when her father Edmundo Reyes Amaya and his friend Gabriel Alberto Cruz Sánchez were forcibly disappeared by the Mexican government. Although she had studied education and was working as a teacher, she soon found that searching for her father and for justice in the case, supporting other family members of disappeared, raising consciousness about the issue, and advocating for preventive laws and measures had not only become a political and personal mission, but also a full time commitment. In order to continue, she founded Comité de Familiares de Detenidos-Desaparecidos Hasta Encontrarlos (in English, Committee of Family Members of the Disappeared and Detained ‘Until We Find Them’) a mere month after her father’s forced disappearance. Today the organization, which is made up of four women – all relatives of forcibly disappeared – continue their work of reporting, raising consciousness, documenting, and providing support to other family members of detained and disappeared.